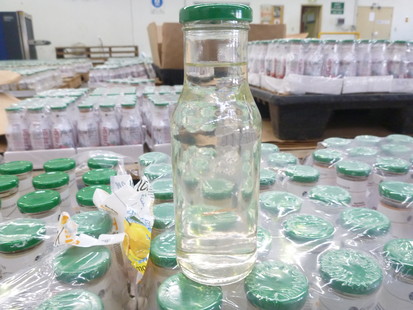 The investigation and subsequent action against the crime syndicate was the result of a Polaris Joint Waterfront Taskforce (JWT) investigation. The investigation was a joint effort involving the Australian Federal Police (AFP), the New South Wales Police Force (NSWPF), Australian Customs and Border Protection Service (ACBPS) and Australian Crime Commission. The team also got active support and close cooperation from law enforcement counterparts in South America.

On the basis of information received, the Polaris JWT seized a consignment of 20,000 bottles of flavoured water with destination to a Sydney warehouse. Australian Federal Police conducted chemical analysis and found that the consignment had 230 kilograms of liquid methylamphetamine concealed within the bottles. Estimated street value of the consignment is approximately $156 million.

In Bogota, the investigation team identified and seized 243 kilograms of cocaine. This contraband was also related to the same syndicate. The consignment was destined for the European market. Cocaine was hidden within cardboard boxes containing flowers.

The Australian joint taskforce also got information on drugs coming to Australia from Colombia. On the basis of this Colombian National Police checked two tonnes of fresh flowers consigned to Sydney. On examination they found 10kg of cocaine. This has a market value of $3.6 million.

The Polaris JWT investigators conducted 11 search warrants across Sydney in March 2015. On the basis of evidence gathered five Australian men and one Spanish/Colombian national were arrested. They were booked for their alleged involvement with this syndicate.

According to Nick Bingham Commander of the Polaris JWT, authorities actively target and disrupt syndicates involved in crime on Australia’s borders. Australian law enforcement, state, federal and international partner agencies cooperate across borders and jurisdictions. Aim is to eliminate organised criminal networks and stop drugs and other illicit commodities in their source countries.