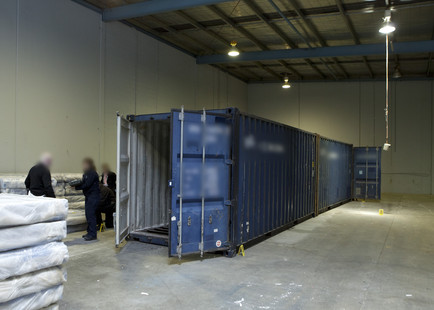 Victoria Joint Organised Crime Task Force (JOCTF) seized 275 kilograms of crystal methamphetamine, with a street value of around $275 million and charged eight men responsible for the importation of the illicit drugs into Australia. The accused include one Malaysian and seven Australian citizens.

In a controlled operation, the containers were delivered to an industrial estate in Bayswater. Following this a number of people accessed the containers. JOCTF executed search warrants in the Melbourne suburbs of South Yarra, Braybrook, Bayswater, Brunswick, Box Hill and Glen Waverley.

Following this seizure, eight men aged between 24 and 34 were charged. Out of this, three were charged with commercial drug importation offences and five for attempting to possess and trafficking of methamphetamine. The offence can attract a maximum penalty of life imprisonment. It is not known if the drug cartel used the services of a Sydney customs broker to clear the containers.

According to Ian McCartney Australian Federal Police Assistant Commissioner and  National Manager Organised Crime and Cyber, the persistence and dedication of police and partner agencies resulted in this successful operation. Because of this  two and a half million hits of this insidious drug did not reach the streets. AFP was supported by Chinese authorities on Taskforce Blaze. This in particular investigates criminal syndicates trafficking ice to Australia and internationally.

Cooperation between various agencies at the national and international level is required to book drug syndicates. At the same holistic approach is required to reduce consumption of drugs and bring down demand.