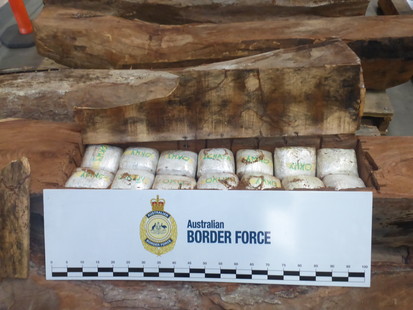 A joint investigation by Australian Federal Police (AFP) and Australian Border Force (ABF) officers resulted in two people getting arrested in Sydney and Melbourne. They were booked for their alleged role in the importation of approximately 154 kilograms of methamphetamine.

After detecting anomalies in 14 of the 121 timber logs arrived in Sydney from Africa, a joint investigation led by the Australian Federal Police (AFP) commenced investigations. Forensic examination by AFP officers that followed revealed approximately 154kgs of methamphetamine in total. AFP has not identified association any customs broker in this case.

According to national Institute on Drug Abuse, Methamphetamine – meth for short – is a very addictive stimulant drug. It is a powder that can be made into a pill or a shiny rock (called a crystal). The powder can be eaten or snorted up the nose. It can also be mixed with liquid and injected into your body with a needle. Crystal meth is smoked in a small glass pipe.

Meth at first causes a rush of good feelings, but then users feel edgy, overly excited, angry, or afraid. Meth use can quickly lead to addiction. It causes medical problems including making your body temperature so high that you pass out, Severe itching, “Meth mouth” – broken teeth and dry mouth and thinking and emotional problems.

According to Australian Federal Police, the 154 kilo of methamphetamine seized has an approximate street value of $115 million. Street value is calculated according to the Victorian median drug price for the specific drug as listed in the latest Australian Criminal Intelligence Commission Illicit Drug Data Report. Final figure is arrived at by calculating the street value of the individual street dosage unit, purity and quantity of the seized drug.

On the basis of the findings of the investigation, the AFP conducted search warrants in Sydney and Melbourne. They arrested a 64-year-old Werrington man in Sydney and a 20-year-old Moonee Ponds man was arrested in Melbourne.