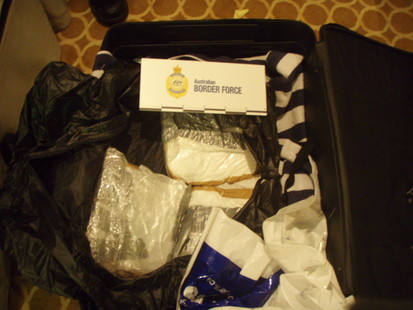 Three Canadian nationals were arrested for drug importation charges from a Cruise Ship in Sydney. Approximately 95 kilograms of cocaine was seized from them.

The seizure and arrest  was the result of a A joint operation between the Australian Border Force (ABF) and the Australian Federal Police (AFP), in cooperation with the US Department of Homeland Security Investigations (HSI), New Zealand Customs Service (NZCS) and the Canada Border Services Agency (CBSA).

On the vessel berthed in Sydney Harbour, ABF officers used detector dogs to search a number of passenger cabins on the ship. This resulted in the recovery of approximately 95 kilograms of cocaine. Cocaine was located concealed in suitcases.

On the basis of this seizure, AFP officers arrested three Canadian nationals, a 63-year-old man, a 28-year-old woman and a 23-year old woman. The three arrested were charged with importing a commercial quantity of cocaine. The offence can attract maximum penalty of life imprisonment. Involvement any Sydney based customs broker is not known.

Commenting on the success of this mission ABF Assistant Commissioner, Strategic Border Command, Clive Murray said that this was a good example of international cooperation leading to significant results in the fight against international drug syndicates.

The present successful operation has resulted in three arrests. ABF is committed to continue with investigations and working with partner agencies to protect the community. This will stop dangerous drugs making their way to Australian communities. This will also pave the way for bringing those responsible to justice.

To counter this different law enforcement agencies in the country has to work together. Agencies based in different countries also need to cooperate and work together to make the fight against international drug syndicates successful.