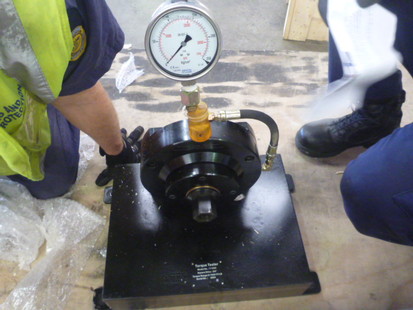 Twelve kilograms of methamphetamine was recovered hidden inside machinery from China by Australian Federal Police (AFP). Two Taiwanese men have been arrested in this connection for the alleged imports.

A consignment described as ‘Torque Testers’ arrived in Sydney from China as sea cargo in June 2014. On information received about the suspicious nature of the consignment, Australian Customs and Border Protection Service (ACBPS) ordered further investigation. Initially the consignment was subject to an inconclusive x-ray. Subsequently the ACBPS officers physically examined the consignment which consisted of five wooden crates, each containing a black metal ‘Torque Tester’.

On detailed examination and routine chemical analysis, officers found that all of the five objects  contained approximately 2.5 kilograms of methamphetamine. The total weight was estimated to be 12 kilograms. The case was subsequently handed over to Australian Federal Police. The AFP has not named any Sydney customs broker involved in this case.

According to Jennifer Hurst, AFP Manager Crime Operations AFP is committed to stop harmful drugs from reaching Australian communities. Success of this investigation is a yet another example of Australian law enforcement agencies working together to stop drug menace in the country.