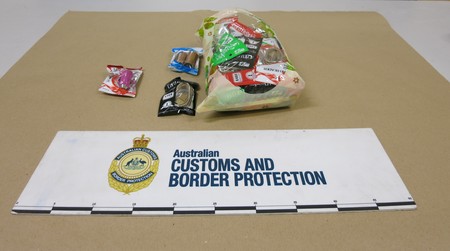 On the basis of an AFP investigation, a Burnside man was charged for the importation of almost six kilograms of methamphetamine, identity crime offences and money laundering. Investigation was into the activities of the 26-year-old Burnside man, who police allege is the head of a criminal syndicate operating within the Congolese community in Melbourne.

Police allege that the man imported approximately 5.9 kilograms of drugs on a number of occasions, and produced and used false documents for money laundering activities. On the basis of the investigation,  the  Australian Customs and Border Protection Service (ACBPS) officers identified three consignments addressed to one of the false identities linked to the alleged offender.

The investigation team unearthed methamphetamine from all the three consignments. First one was concealed within the lining of a suitcase. The second one was concealed within a tea set. The third one was within a box of USB drives. The ACBPS examination and analysis confirmed the presence of methamphetamine in all the three consignments.

Investigation was later passed on to the AFP team along with the consignments with a combined weight of 1.9 kilograms. In April 2014 another package linked to the alleged offender was seized and was found to contain 248 grams of methamphetamine. Following this, in May 2014, AFP officers executed search warrants at the home address of the alleged offender. The search resulted in the seizure of 3.7 kilograms of methamphetamine, two false South African passport and $96,500 in cash.

According to Jennifer Hurst, AFP Manager Crime Operations the community will benefit from the disruption of this syndicate since the criminal syndicate was importing drugs and taking steps to conceal the profits it made.

The accused in this case will be charged with importing a commercial quantity of methamphetamine, contrary to subsection 307.1(1) of the Criminal Code Act 1995 and knowingly producing false documents contrary to subsection 137(1) of the Anti-Money Laundering and Counter Terrorism Financing Act 2006. The maximum penalty for the offences can be life imprisonment.