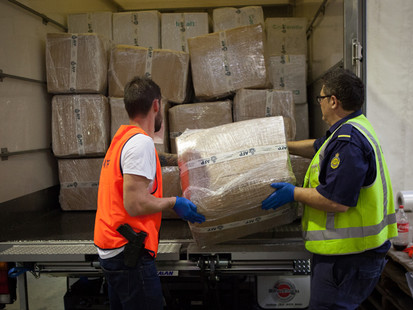 As part of an ongoing joint investigation into the alleged importation of more than $3.5 million worth of ephedrine concealed in vehicle parts, detectives have charged two men.

Inconsistencies with the air freight consignment, which was declared as vehicle parts, were identified by ABF officers at the Sydney container examination facility.

During the following deconstruction of the goods, it was revealed to contain almost 50kg of powder concealed within the items.

The powder was tested and returned a presumptive positive result for ephedrine, which has an estimated potential street value of more than $3.5 million.

Detectives from the State Crime Command’s Drug and Firearms Squad seized the consignment and conducted a controlled delivery.

Investigators also seized 50kg of iodine, which has an estimated potential street value of $50,000.

The iodine and ephedrine seized during the operation has to potential to produce 38kg of methylamphetamine (ice), with an estimated potential street value of $9.5 million.

The men were taken to Bankstown Police Station and charged with attempting to possess an amount of precursor prescribed by regulations and attempted possession of a controlled precursor.

Investigations by the Drug and Firearms Squad are continuing.