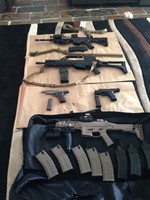 Search warrants were executed at Varsity Lakes and Ormeau by Taskforce Maxima and officers from the Australian Customs and Border Protection Service (ACBPS). Following this, two men have been charged with weapons and drug offences.

ACBPS officers at Brisbane International Mail and the Sydney Gateway Facility initiated investigations after they identified parcels containing weapon parts and other illicit materials. These packets were addressed to Varsity Lakes and Ormeau respectively. Search warrants issued by between the ACBPS and Taskforce Maxima were subsequently executed at the two addresses.

As a result of the search conducted, officers located approximately 500 steroid tablets, a quantity of steroid liquid and a Taser device at the Varsity Lakes address. At the Ormeau address officers recovered  a cache of weapons and child exploitation material.

At the Ormeau address, the search team recovered weapons including a M4 A1 Carbine, Heckler & Kosh G36, a G5K, a Walther P99, a PKA semi automatic pistol and a replica Desert Eagle pistol. The task force has not disclosed identity of any Brisbane customs broker in this connection.

For items recovered from Ormeau a 33-old-male from Varsity lakes has been charged with one count each of unlawful possession of a weapon (Taser) and possession of dangerous drugs (steroids).

Brendan Smith, Detective Inspector of Taskforce Maxima is of the opinion that the arrests were another great example of Queensland Police working in conjunction with the Australian Customs and Border Protection Service. He said the law enforcement agencies will do its best to keep weapons and drugs off Queensland streets.