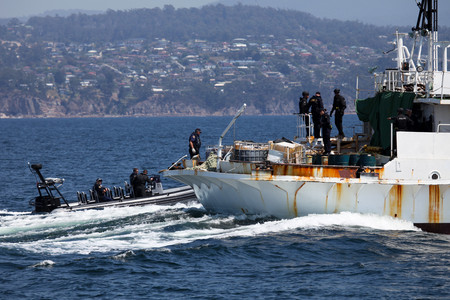 In a major multi-agency operation, six men were arrested in Melbourne and Queensland. This has resulted in exposing two criminal syndicates working together to import and distribute cocaine in Australia.

On examination by the Australian Federal Police (AFP), ABF and Tasmania Police at the Port of Hobart, approximately 186 kilograms of cocaine was seized. Estimated street value of the cocaine seized is $60.45 million. In this connection, ten foreign nationals were charged with attempting to import  commercial quantity of a border controlled drug. Since this is a smuggling operation using marine vessels there is very little chance of involvement of any Sydney based customs broker.

Fifteen search warrants across Melbourne and Queensland were executed by Victorian Joint Organised Crime Taskforce (JOCTF) comprised of AFP, Victoria Police, ABF and the Australian Criminal Intelligence Commission (ACIC). They were assisted by Queensland JOCTF, comprised of the AFP, the Queensland Police Service, ABF and ACIC.

Following this six Australian nationals were charged for their role in this attempted importation. The task force also seized drug manufacturing equipment $93,000 in cash. The investigation team allege that the men arrested were planning to transport cocaine to Australia for distribution to multiple drug trafficking syndicates across Australia.

Task force on crime will continue with investigations on these drug syndicates. This is done with the active cooperation and support of international law enforcement partners. Success rate of these operations is an example of dedication of officers involved effective cooperation between Australia’s law enforcement agencies at both a state and Commonwealth level.

Those arrested are charged with attempting to import a border controlled drug, namely cocaine, contrary to section 307.1 of the Criminal Code Act 1995 (Cth). These charges can attract a maximum penalty of life imprisonment.