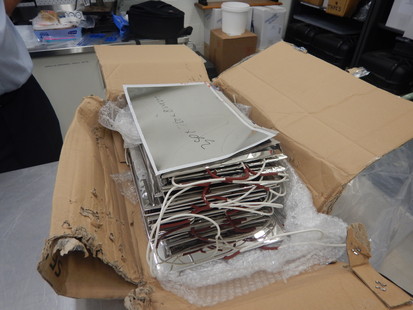 In a joint operation of the Australian Border Force (ABF) and New South Wales Police Force (NSWPF) 300kg of ephedrine hidden in 50 individual consignments were seized. Ephedrine was concealed in a very highly sophisticated manner in vehicle radiators, tool boxes, wall hangings and portable coolers. This was unearthed in raids on ten homes across Sydney.

During the course of the raids the team also came across nine unlawful non-citizens who were detained.
Australian Border Force (ABF) started working on links to an organised criminal network of Chinese nationals operating in the south western suburbs of Sydney. This investigation resulted in identifying multiple imports of ephedrine from China.

Search and seizure warrants at ten premises by ABF officers and NSWPF Drug Squad resulted in the arrest of two men from Campsie, aged 29 and 26. They were charged with importing a Tier 1 good, namely ephedrine, in contravention of Section 307.11 of the Criminal Code.

The 26-year-old, who was an unlawful non-citizen, was bailed and taken into immigration detention. His accomplice the 29-year-old was remanded in custody. For the offences charged, the maximum penalty can be 25 years imprisonment and/or a fine of $900,000.