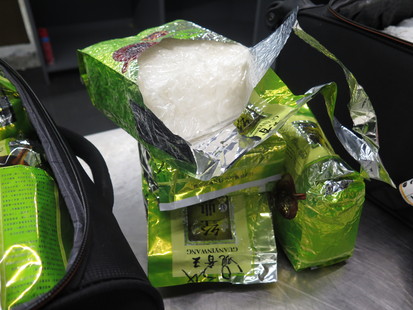 Three men were arrested and charged at Melbourne Airport for allegedly importing 70 kilograms of illicit drugs hidden in luggage. This was following an investigation and detection of drugs by Australian Border Force (ABF) and further investigation by Australian Federal Police (AFP).

The accused three, all Malaysian nationals arrived in Australia on a flight from Kuala Lumpur. ABF officers identified anomalies subsequent to examination of the men’s luggage. AFP Forensics continued with  further analysis of the confiscated material.

Chemical analysis proved the material concealed to be 55kg of methamphetamine and 18kg of heroin. These material were concealed within the three suitcases. It is not known if any Sydney custom broker is involved in this case.

Methamphetamine – meth for short – is a very addictive stimulant drug. It is a powder that can be made into a pill or a shiny rock (called a crystal). The powder can be eaten or snorted up the nose. It can also be mixed with liquid and injected into your body with a needle. Crystal meth is smoked in a small glass pipe.

Meth at first causes a rush of good feelings, but then users feel edgy, overly excited, angry, or afraid. Meth use can quickly lead to addiction. It causes medical problems including making your body temperature so high that you pass out, severe itching, “Meth mouth” – broken teeth and dry mouth, thinking and emotional problems.

Heroin is a white or brown powder or a black, sticky goo. It’s an opioid drug made from morphine, a natural substance in the seedpod of the Asian poppy plant. It can be mixed with water and injected with a needle. Heroin can also be smoked or snorted up the nose. All of these ways of taking heroin send it to the brain very quickly. This makes it very addictive.

Major health problems from heroin include miscarriages, heart infections, and death from overdose. People who inject the drug also risk getting infectious diseases, including HIV/AIDS and hepatitis.