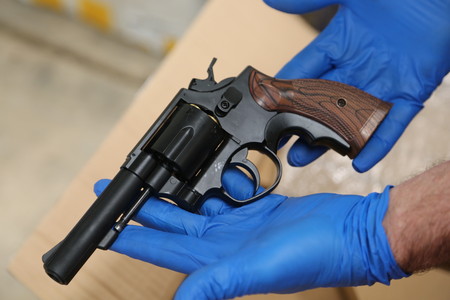 Fairfield Local Area Command several weeks ago had arrested a man with weapons. This was following  search warrants at St Andrews and Ingleburn. Police say the items are sold to customers at markets in Sydney. Involvement of any Sydney customs broker in this case is not immediately known.

The investigation of the case was handed over to the NSW Police Firearms and Organised Crime Squad and the ACBPS for further investigation under Strike Force Kentmer. On the basis of this investigation ACBPS officers detected a major shipment of items at the NSW Container Examination Facility on Friday 6 December 2013.

In this connection officers from the NSW Police and the ACBPS attended an address at St Andrews and  arrested a 49-year-old woman. She was charged with importing tier two prohibited goods and was refused bail.

According to Wayne Walpole, Commander of the Firearms and Organised Crime Squad, Detective Acting Superintendent this operation was the proactive work of local police that initiated this investigation, and the close working relationship between the police and Customs that enabled us to resolve this case so quickly.