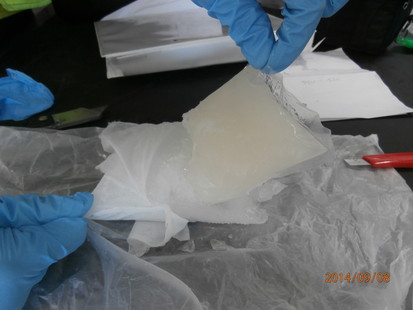 Joint Organised Crime Group (JOCG) confiscated 88 kilograms of heroin and 21 kilograms of methamphetamine in frozen fish fillets. In this connection two men have been charged with drug offences.

On the basis of intelligence provided by ACBPS, investigation started when a 57-year-old Vietnamese/Canadian national arrived in Australia. Later the ACBPS officers intercepted a consignment from Kuala Lumpur linked to the suspect containing three pallets of white polystyrene boxes containing frozen fish.

Preliminary investigation showed ice packs contained an assortment of clear and brown liquids hidden beneath frozen fish. On testing by the ACBPS officers, it was found that the brown liquid contained heroin and the clear liquid contained methamphetamine. No Sydney customs brokers name is associated with this importation.

This was followed up in September with two search warrants in Fairfield. A number of items including a makeshift heavy duty press, which can be used to compress bricks of heroin were recovered. In this connection two dual Canadian-Vietnamese nationals were arrested and charged.

According to Ramzi Jabbour, AFP National Manager Serious and Organised Crime, AFP will continue to work with its law enforcement partners to ensure illicit drugs do not reach the streets of Australia. AFP and along with partner organisations will ensure the safety of the Australian community by stopping organised crime groups attempting to import illicit substances.

Though there can be variations on the basis of purity, 88 kilograms of heroin can be converted to 780,000 street deals. The street value of this consignment can be $54 million dollars. Seizure of 21kg of methamphetamine, a very dangerous drugs along with the heroin is a major success for the Joint Organised Crime Group (JOCG).