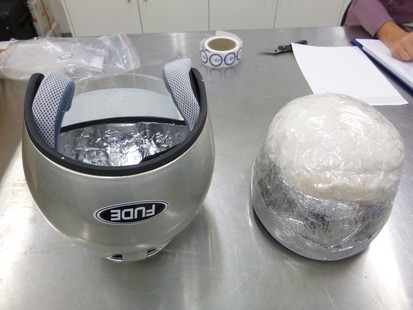 In an appeal to high school students and parents, the Australian Customs and Border Protection Service (ACBPS) advised them to be wary of collecting parcels on behalf of other people.

This was on the basis of the findings of investigating agencies on the role of students in smuggling activities. ACBPS officers while executing warrants in New South Wales (NSW), ACBPS officers found out that two Sydney-based high school students were allegedly recruited to collect parcels containing an illegal substance. Students did this in exchange for money.

The people who were importing these illegal items were paying these high school students few hundred dollars. The students were to accept the parcels, on behalf of another person, and then pass on the package to the person(s) responsible for the importation. They do not realize that the package can contain illegal substance which can get them into serious trouble. The picture above shows a helmet which contained drugs hidden in it.

In one instance, it was found out that one of the parcels contained four kilograms of the illegal precursor substance ephedrine. This drug when converted into methamphetamine, has a street value of approximately $250,000. The students will face relevant charges.

In other operation on importations containing the illegal precursor substance ephedrine, ACBPS officers executed simultaneous warrants on five premises in NSW on 14 November 2013 with the assistance of NSW Police. On the basis of the investigation that followed,  approximately four grams of ice was located. They also recovered a large quantity of cash believed to be the proceeds of crime.

This resulted in the arrest of a 24 year old man by the NSW Police. Following this many high school students were also interviewed in relation to their involvement in previous importations.

According to Tim Fitzgerald, ACBPS Regional Director NSW the agency has spoken to parents and principals of the high schools about the dangers involved. This opportunity was also use to warn students about the serious consequences of this type of activity.